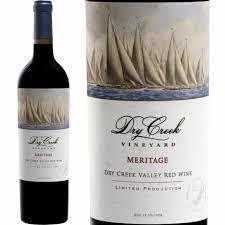 Fifty years ago, young David Stare, graduate of MIT with an MBA from Northwestern, broke ground on a select parcel of land in Sonoma’s Dry Creek Valley, now one of America’s top viticultural areas (AVA). His timing in 1972 was great:  just on the cusp of a renaissance in California winegrowing as a new generation of entrepreneurs and winemakers was taking off. America’s wine boom was underway.

Traveling through Germany and France after college, Stare was bitten by the wine bug, especially the white wines of the Loire Vally, and especially Sancerre and Pouilly-Fumé Though advised against planting sauvignon blanc in Dry Creek, Dave planted it anyway.

He labeled the first wine Fumé Blanc, a name coined by Robert Mondavi in the late sixties to designate sauvignon blanc made in the crisp dry style of the Loire. Dry Creek Fumé, with its grassy aroma and grapefruit-accented flavors has won numerous awards, including a Sweepstakes at the Sonoma County Fair Wine Competition—at which I frequently served as a judge.

In 2009 Dry Creek produced a somewhat different rendition of sauvignon blanc, one of the most seductive Sauvignon Blancs in the world and one of my personal favorites. Dry Creek Vineyard Sauvignon Blanc is a complex charmer with multifaceted aromas and flavors: citrus with touches of lemon curd, the crisp cut of new-mown grass, fresh coriander and bright floral accents, as well as the exotic hint of muscat due to the presence of sauvignon gris and sauvignon musqué in the blend. Well-balanced, long in finish, an alluring match for goat cheese, shellfish, especially shrimp and oysters—raw or deepfried.  The 2020 is $20, suggested retail, occasionally found for less.

Stare also drew from old stands of zinfandel, yielding concentrated ripe-berry fruit that has made Zinfandel one of the iconic wines of Sonoma County, and Dry Creek Valley in particular. Over ensuing decades, Stare expanded the range of Zinfandels the winery produces, including single vineyard bottlings such as the estate Spencer’s Hill, as well as Somers Ranch, Beeson Ranch, and the classic Old Vines Zinfandel—as many as eight Zins in exceptional vintages, ranging in price from $26 to $55 a bottle.

As a sailing enthusiast, Dave Stare took full advantage of being near the Pacific Ocean as well as San Francisco Bay and summers off the Maine coast, plying his sailboats through the waves. During his stay in France prior to founding the winery, Dave had also became enamored of Bordeaux wines—the dry white sauvignon/Semillon blends, but also the venerable reds of the Médoc, St. Emilion and Graves. In 1982 he launched the first of a series of sailing vessel labels that now include a Meritage blend, The Mariner, as well as a Reserve Cabernet Sauvignon known as Endeavour, commemorating the British ship helmed by Captain James Cook in his pioneering voyage of discovery to the Pacific in 1768.

In 2021Wine Enthusiast magazine honored Dave as Wine Legend of the year at their Wine Star awards celebration.  Dave retired as president of Dry Creek Vineyards in 2006; his daughter Kim Stare Wallace, involved with the vineyard since childhood, took the helm. She and husband Don Wallace now “steer the ship,” bringing fresh energies and renewed focus to the vineyards and winery.  Recognized as one of the 100 top wineries of California, Dry Creek is one of the few still entirely family-owned and run. Dry Creek Vineyard is noted for its warm hospitality, dedication to sustainably farmed vineyards, and wines that consistently earn 90+ ratings from critics.

If your travels take you to wine country in northern California, pay a visit to the winery and its attractive tasting room. For more info and events commemorating the 50th Anniversary, go to www.drycreekvineyard.com